Want a Virginia nuisance opossum trapping removal service at your home this afternoon? Well, more than likely we can get to you opossum problem today if not tomorrow. Opossums rarely get into your garbage cans or garden but they can. And if there is a mess around an opossum is more than happy to clean up the mess. People will call is saying an opossum killed their chickens but generally this is not the case. Most people call us complaining that opossums hang in their yards, and not because of any real opossum problem. Our Opossum Trapping Removal Experts will glady handle your nuisance opossum problem if you call us at (804) 729-9103. 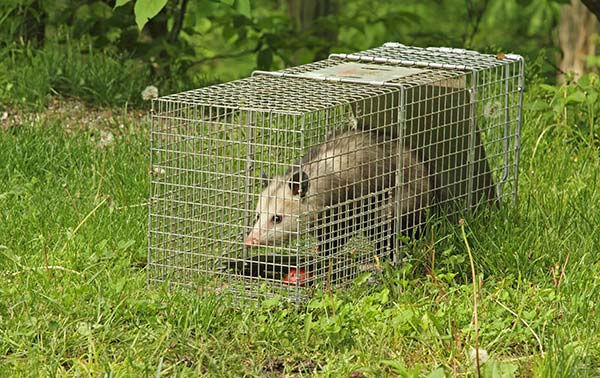 Opossum have no fear of boxes, cages or traps so catching them is no problem for our technicians. We usually bait the traps with cat food, fish, fruit, or marshmallows. Quick setup, easy catch.

When frightened an opossum plays dead. Also, opossum easily adapt to your Virginia home’s yard, field or garden. And if no one bothers an opossum it will gladly stay with you. You’ll need Animal Removal Services Of Virginia Opossum Trapping Removal Experts if you don’t want that opossum around.

Opossum are nocturnal animals, so it is unlikely you will see the during the day. But, if you see them during the day they move slowly. More than likely you can catch up to them and grab them by the tail. But, we don’t advise doing this because an opossum bites! If you do catch an opossum by the tail, it will climb it’s tail looking for a finger meal. We suggest you call our opossum trapping removal experts at (804) 729-9103. and avoid being bitten. Furthermore, what do you plan on doing once you catch that little opossum critter? 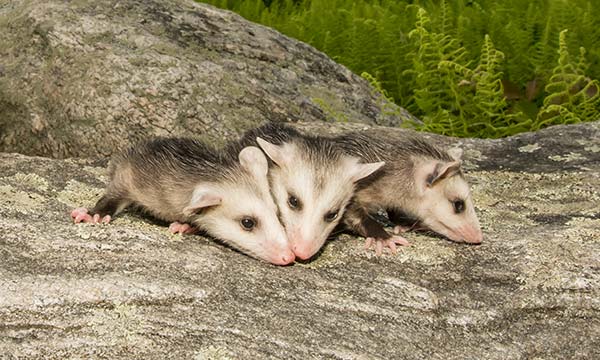 Baby opossum can warm your heart, and they can also make loving pets. But, there is no way to humanely or legally relocate baby opossum in Virginia. Virginia State law allows you to trap an opossum but then you must either release it on your property or euthanize it.

Sometimes an orphaned possum may be found and raised as a cute pet.  But there are concerns regarding this raising an opossum as a pet. Although not an aggressive animal and docile, opossums come down with disease and infections when in captivity. In captivity they can survive for more than 3 years if given proper nutrition and care.

If you don’t want us to kill the opossum in your yard we can suggest ways so they won’t create problems. You definitely want to keep opossum from creating a den under a deck, patio or garage. We will come in and access your situation and close off any area that might house a family of opossum. But, if you think a  mother opossum has already moved in we can set up a system that allows an opening out, but blocks the ability to get back in. Animal Removal Services Of Virginia Humane Opossum Trapping Removal Experts will make sure that any babies get out as well. Once the family is out all openings will be closed.

If you have a pet door, an opossum can occasionally find its way in. Closing the doors to all your rooms and open the outside doors. An opossum will not show aggression and you may get it out by gently pushing it towards the open door with a broom. 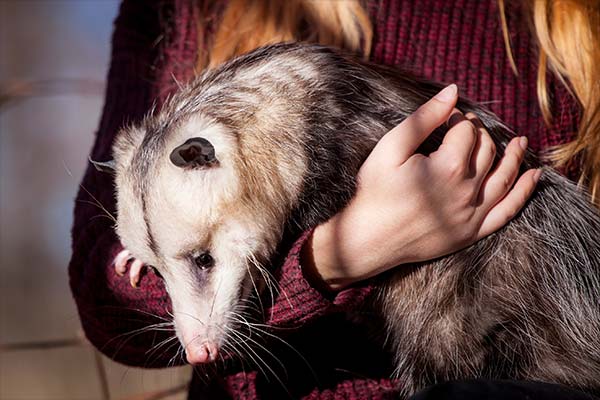 If we capture a baby opossum for you and you want it as a pet you are more than welcome to it. But you do need a state permit.  Also, be prepared for a great deal of work if you want to raise a baby possum. We can give you some advice on the process of getting a permit.

Opossum eat food from both plants and animal sources. Also, they search for their food in the evening hours and will eat many different types of food.  Some of the foods an opossum eat are dead animals, grass and plants, insects, rodents, frogs, birds, fruit, grains, eggs, and off course food from your garbage cans.

As an aside, if a person chooses an opossum as a pet it becomes difficult to get the variety of foods they need. Also, n opossum need a high intake of calcium daily.  Due to this need, opossums often eat the bones of rodents and other animals found dead. 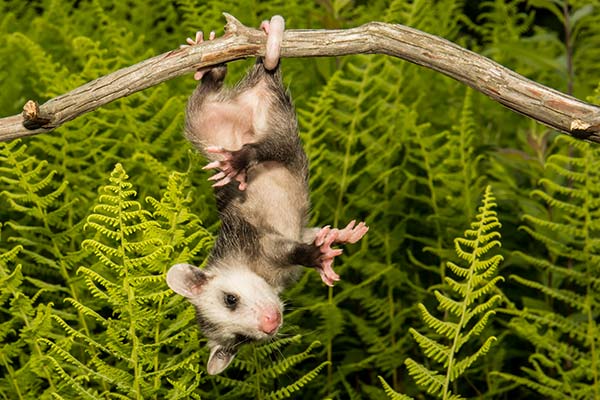 If you do manage to get a permit to keep a baby opossum they sleep in dark places. You must provide a baby opossum with a resting place so it can sleep during the day,  An opossum can also be trained to use a litter box. But get ready for a big job raising a baby possum.

Lifespan Of A Virginia Opossum

Virginia opossums have a lifespan around 2 to 3 years when living in the wild. In captivity around 4 years. They have to deal with predators and human intrusions. The short lifespan probably occurs since they have no defense against predators.

Reproduction Of A Virginia Opossum

Since an opossum is a marsupial, and the only one in the US, the feamle suckles and carries its offspring in a pouch. A female opossum generally has one to three litters in a year. Also, they can give birth between 5 and 30 young. Since the female only has 13 teats only the first 13 may survive. The litter lives in their mother’s pouch for about two-and-a-half months. After that start climbing on her back. Finally, they leave their mother around four or five months. 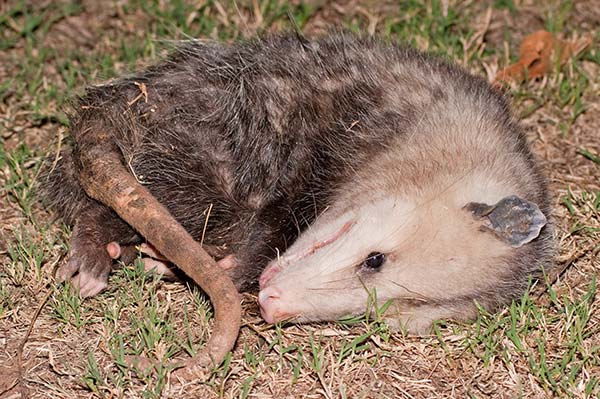 This guy is playing dead. Note his eyes are open. But, Playing dead is an involuntary response on the part of the opossum when confronted. Also, they can go into shock from 40 minutes to 4 hours, and will produce a stinky scent.

Opossum display hissing and drooling behavior with their mouth open. Many people think this behavior must be a sign of rabies. However, this is just opossum acting which an opossum uses as a defense mechanism. In fact, seldom do opossum have rabies.